The standard apparel of a Roman man was the Tunic. A shorter version of the more formal Toga-like dress, The Tunica was designed for Roman soldiers. Made short (so as to not impede motion), they were made of heavy linen or wool. Tunicas were always Red in color. The would be cinqued with a leather belt or Ventralis. Sometimes (especially in winter), loose shirts were worn underneath. Roman Armor was placed directly over the Tunica (often without padding). The Tunica was seen in use from the 1st Century until the early 4th Century. 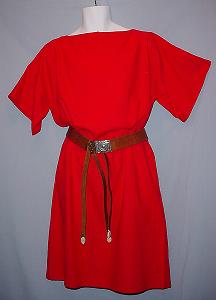