The Tunic was a popular style of Medieval Clothing worn by men. Based upon the Ancient Roman Tunica, they were made and designed the same. Worn by the emerging Middle Class ( in the mid to late Middle Ages), they were quickly adopted by Nobility. Made of a single or twin component pieces (sewn), they were sized to some degree. Worn by placing the over the head and falling loosely, Medieval Tunics featured wide sleeves and cuff openings (fashion). They were cinched at the waist with a belt or similar cloth tie (depending on Region). As they were used by Nobility, Tunics were dyed in many colors. Some were trimmed in fine processed wools and ermines. Often highly decorated, depending on the Region, they could be a "status symbol". Military Forces also adopted The Tunic, in many cases as an early form of uniform. Coloring was often associated with one's loyalty to a faction. Tunics were best suited to military activity due to the range of motion they provided to their wearer. Winter and Sumner Tunics were known to exist as well. Heavy wools and lighter fine linens lined with muslin were popular. By the end of The Middle Ages, as clothing styles changed, a Nobility would stop using them. The Tunic would actually "pass down" to commoners in some Regions as a sign of their "poorer" Class. Variation of The Tunic would continue in some locations far beyond The Middle Ages. Russian working class populations used varieties well into the 19th Century. 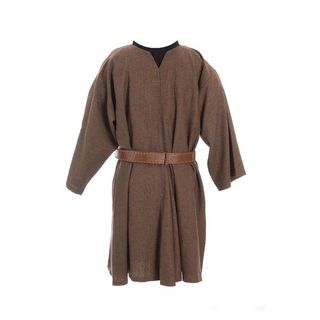