Iconic in appearance, The ‘’Tudor Bonnet’’ was a common Upper Class headpiece worn by Men around the late 15th Century. Although it would fall from mainstream fashion, The Bonnet would continue to be worn as a type of Academic insignia for many English Universities and Colleges. The Academic style even traveled over The Atlantic to The United States, where it is used in the same fashion. Made of common formed felt or soft cloth, the basic shape was circular. A soft cloth component attachment was attached which formed the fore and back head piece. Although darker colors were preferred, some were made in much more garish and expensive fabrics and colors. In some cases, especially among Nobility – attached items such as feathers or poms were added.

Made particularly popular during the reign of England’s King Henry VIII, The Tudor Bonnet began the official headgear of The Royal Court. After his reign, and with The Bonnet becoming singular with Academic Institutions, The Tudor Bonnet was worn with Robes of Stature. These outer garments, descended from Royal Robes during The Medieval Era, are used to identify one’s “standing’’ with The Institution (Professor, Chairman etc.) 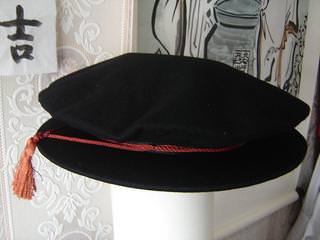