The Roman musical instrument known as The Tuba, was very much different than the modern device of the same name. Technically seen as a "Herald's Trumpet", it was based on earlier Greek versions. Made of hammered Brass, The Tuba was between 3 and 4-feet long. As with most Roman musical instruments, it featured no valves or keys. "Notes" (as many as three), were produced by lip and breath control. Modern reproductions give The Tuba a mid-pitched "C" sound. Often used in Ceremonial Processions, it differed from it's Military "relatives", The Lituus and Buccina. The Tuba was at it's highest use during the Imperial Period. It would eventually evolve into the Medieval Trumpets used from the 8th through 14th Century. 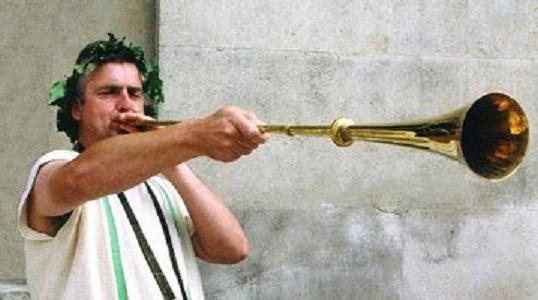