Considered to be the largest "howitzer" class of Medieval artillery ever built. Commissioned in 1586, it's exact need (at the time) is unclear. The bore shows signs that it was fired at least once, although there is no documentation that The Tsar was ever used in siege or battle. Having been placed in various locations throughout Moscow, is may have been used as a propaganda weapon initially. Napoleon captured it with the idea of moving it to France as a war trophy. It's original wooden carriage was burnt in 1812 (with a metal replacement installed in 1835). The Tsar weighs in at 40 tons and has a barrel length of 18 feet. She is made of bronze and has a 50-inch bore diameter. The cannonballs displayed with her are NOT the type that The Tsar would have been able to fire (and are used as a static display item). The Tsar was designed to fire 200-pound canister type shells. A canister contained pieces of stone or metal balls or shards - turning the weapon into a giant shotgun). The Tsar was restored in 1980 and is displayed in Red Square, Moscow, Russia. 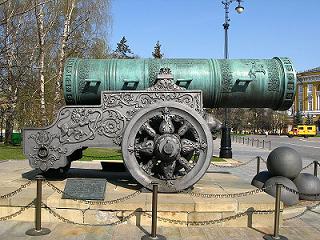