Possible originating from Portable Altars (used by The Church), these pieces were designed to present a suitable “backdrop” to an Altar. They were mobile (in that they were easily stored and moved). Made of three painted panels (which folded) – they often depicted scene of religious significance (biblical scenes, etc.) Often cheap to make, “lesser known” Artists would be commissioned to paint them. Some Triptyph's were made more elaborately. Many of these were created for Noble Houses (or even Royalty), for their private Chapels. By the late Middle Ages, the commissioning of Triptyph's depicting Nature scenes or scenes of battle were popular among Nobility. The style continued well into The Renaissance Era (especially in Spain and Italy). Many Medieval Triptych's did NOT survive into the Modern Era. 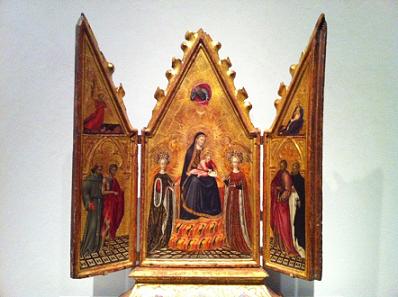