The ''Rank'' or identifier of ''Triones'' was seen in The Republic and Imperial Roman Legions, from the 3rd BC to The 4th AD. In short, The Triones was a simple basic Recruit to The Legion (but not Legionnaire).

Great care was placed into the selection of a Triones in the beginning (BC). One had to be Male, in ''good health''. Eye and teeth were examined – as well as other ''defects which might pose so an issue that it would effect a Group'' (eg :Lameness, etc). Triones were examined by a Physician of The Legion. Even overall weight was considered.

It could take up to 6 months for a Triones to be properly trained. Constant drill (marching), running, climbing, packing and unpack proper equipment and of course digging and establishing a Camp – were just a small part of early Legion training.

Of course, the primary training needed was not only how to ''move'' as a Unit (Formations), but the intense training in the use of Roman Weaponry. The Gladius Sword (in training form) was wooden and weighted to be twice as heavy as a real one. This tactic created strike strength and accuracy.

Upon initial graduation from Triones, a Soldier was identified as a Miles (or Private, comparable with the ''modern'' Infantryman). Any form of specialized training was begun from this point. After a varied training period, a ''Legionnaire'' was born. 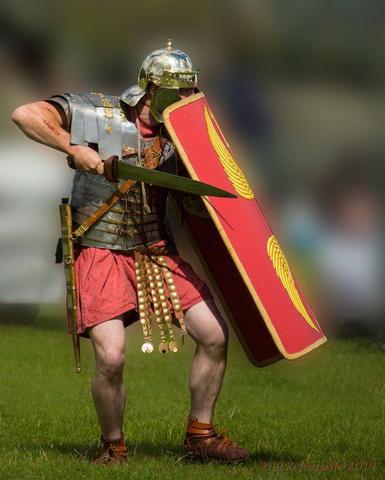