long with the use of previous “Middle Ages, Low Tech” Armor adaptations for Trench Warfare, - the development of better ways to protect the head and face were born as well. Unlike the Medieval Helmet with mostly protected the entirety of the head of the wearer, it limited vision (even with the inception of movable Visors). In the “Modern” battlefield of World War I, one would not think that such devices were needed (steel helmets such as The Brodie, Adrian and Stahlhelm were all pretty standard by 1915-16). Yet ideas, attempts (and even actual battlefield applications) were found. A “classic” design idea was from England in 1916. It was called “The Face Shield”. Designed to be worn with a standard issue helmet, it was made of slightly shaped, iron plating (¾ thick). Leather straps were included which allowed the wearer to attach the plate to their face. The Mask had 2 eyeslits for seeing. It was actually used (briefly) in the trenches by British and American Forces.

France (not to be outdone), went “far back” into Antiquity with their 1915 “Face Mail” Helmet design. Much as Medieval Half-Helmets were designed – a short layer of Chain Mail was attached to the bottom of The Adrian Helmet. This created a 360 degree “steel skirting” around the face. Primitive, it was thought to withstand small shrapnel fragments. Another innovation based on “Face Mail” was attempted in England. In this version, a leather “face mask” was designed to be worn securely on the face. Having eye openings in the face, these were slanted (to further enhance vision protection). Finally, a lower Chain Mail “skirt” was attached underneath the face mask (to protect the lower face (and upper neck to some degree).

These versions were also made to be worn with a standard “Brodie” Helmet. America also saw the need for better head and facial protection. They adopted a more “classical” approach with their 1917 “Machine Gunner's” Helmet. Made of steel, the “MG” Helmet was designed to completely cover the whole head and face. A “slit viewer” was designed to give slightly better front vision. A front Visor (which lifted to reveal the whole face), was available in some limited versions (for Tankers). It's cumbersomeness and limiting “side vision”, quickly scraped this design (and it was never used). 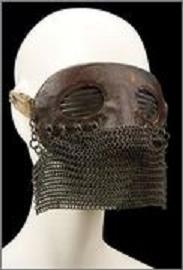