A Trench Club was and improvised hand-help striking weapon, designed to be used in close quarters combat. No Country made an “official” “Battle Club”. Soldiers on both sides in the Trenches fashioned these deadly devices (with their own style and flair). The basic design of The Trench Club was a bat or striking stick (very similar to the American Sports Baseball Bat device). Made of Oak and other hardwoods, they could have handles (with leather grips and straps). The upper portion of the Club featured driven spikes, nails or jagged pieces of metal. These would be swung and used as heavy trauma weapons (bone crushing and soft tissue damage). Deep penetrating wounds would sever arteries. Often in hand to had combat within the Trenches (mas casualty weapons such as the Machine Gun or Grenade), could not be used. The Trench Club, Sap or Trench Knife was the preferred weapon of choice. 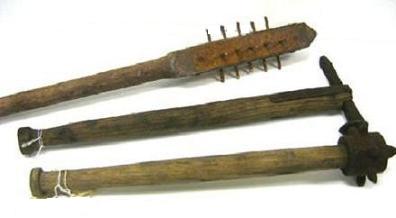