''Treasure Binding'' or Jeweled Bookbinding, was an Art Form used with certain Religious illuminated manuscripts. Such pieces were popular from the 3rd to 8th Centuries AD. Very few have survived into the 21st Century, due to a myriad of reasons. Those which have throughout The World are well preserved and cared for in Museums and a few private collections.

While seen possibly as an extension of one's ''wealth'', Treasure Binding served a more ''Earthly'' purpose. The ornate covers were made to glorify the overall image of Heaven as a ''Palace'' of ''Golden Streets with jeweled Walls''. As such, the covers to various Illuminated Bibles and Gospels were crafted.

Most Artisans skilled enough to work in the Medium of precious metals and gemstones, were hand picked to0 work in Imperial Shops under The Holy Roman Emperor of that particular Era. The Emperor Charlemagne used such Treasure Bindings as ''gifts'' to influence Regional Kings, Queens and High Clergy.

In addition to precious metals and gemstones, some Treasure Bindings were made with carved Ivory and other precious materials (fine silk backings, etc). Today's ''cost'' would be prohibitive – at best.
Most such works would fall prey to War (plundering), with such ''prizes'' quickly stripped for their Gold and jewels.

A form of ''Revival'' began in the early 20th Century, when various ''Guilds'' of English Artisans began to attempt to duplicate the rare Art Form. 100 such examples were fashioned for sale to wealthy collectors and benefactors (even these are seen as rare by the standards of today). 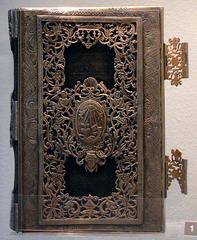