The use of The Bow and Arrow in Military Operations in Ancient Greece was somewhat rare. Ranged weapons were known, but it was still The ‘’Age of Shield and Spear’’. In the 2nd Century BC, some few examples of the use of The Toxa (Bow), were seen. The Soldiers who used them were known as “Toxotai”.

On par with The Peltast (or Slingers), The Toxotai were normally the poorer of Soldiers (Commoners), who barely could afford a Sword. They used primitive, non-recursive Bows (which provided very little effective range). Eventually, The Toxotai did begin to carry Sword and Dagger to protect themselves from advancing Enemy Infantry. So too, did they begin to carry and use a rudimentary version of The Buckler Shield.

Of note, The Toxotai also “pioneered” a form of “Biological Warfare” as well. The Greek Archers began to coat their Arrow Tips with rotted or diseased animal flesh. They would fire these Arrows at Enemies and into Fortifications, in an attempt to either disable Enemy Soldiers (wounds) or at best – start a Plague. 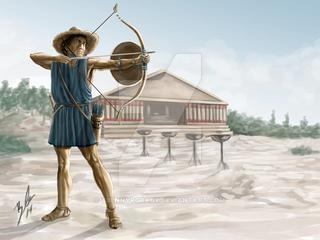