Beginning as a form of “training preparation” for battle, The Tournament would evolve into a largely “recreational” and entertainment function in Medieval society. The Church did NOT approve of Tournaments or Jousting (the Art of Horse Combat). It was considered “a moral vice”. Some Royalty even forbade Tournaments and Jousts – for fear of the massing of possible “upset Peasants” could lead to a revolt! In the 12th Century, The Joust was seen as an important facet in training young Knights Horse Combat. Hours would be spend attempting to unhorse on another. The French saw an entertainment value in such displays and staged the “first recorded” Joust in 1066. In fact, the Promoter of the Event – Baron Purelli – was killed in a match! As word of these “matches” spread” - other Countries would send their “best” Knights to participate against another Kingdoms.

Competition would be fierce – as not only was “personal honor” at stake, but possibly the “honor” of one's Kingdom!. Soon other “Events” were added to The Joust. Single-handed Combat with a variety of weapons was encouraged. Knights fought with Sword, Dagger, Axe and Mace. Some even died from their injuries. As these functions became important to Medieval Society, so to was the ability to make money from it. It was “accepted” that Nobility would place “bets” on supposed winners. The Commoner was no different. In fact, one of the most “lucrative” business “ventures” at a Tournament was The Money Lender. He would set up his tent nearby and “wait” for Customers. He also had several large Men to “enforce” payment. In a more “legal” note, a Tournament was a good place to create much needed revenue. Butcher, Cobblers, ALL manner of “independent” Merchant and Craftsmen – would set up “Tent Shops”.

Much like today's “Modern” sports, Food Sellers would ply the Crowds for Customers. A Tournament was a huge boost in a Cities “coffers” as well. Still a Tournament match was a dangerous thing. In the beginning, ACTUAL battlefield weapons were used. Knights could easily be killed in the “excitement” of a Match. By the late 14th and early 15th Century, “safer” Jousting Lances were employed. Designed to shatter or break on impact – they still killed and crippled. Developments in Jousting Helmets and specially designed Armor with Holds and Rests for better control of a “seated Lance”, were made. It was around this time the iconic wooden “Fencing”used to separate the two participants was installed (they simply charged each other in the beginning, all over).

Rules and regulations were starting to be “codified” and followed (creating a more organized “sport”). By the end of the 15th Century however, the “thrill and excitement “ of The Tournament waned. An attempt in the early 19th Century (in England) was attempted. It was a huge success – but never duplicated. Today, the “Art of Horse Combat” actually still exists. Modern “Knights” utilize actual Armor and similar weapons (albeit much safer). It had become a type of “Medieval Mixed Martial Arts” - of sorts, with participants in Organizations (Worldwide) meeting to “Tilt on the Field of Honor” 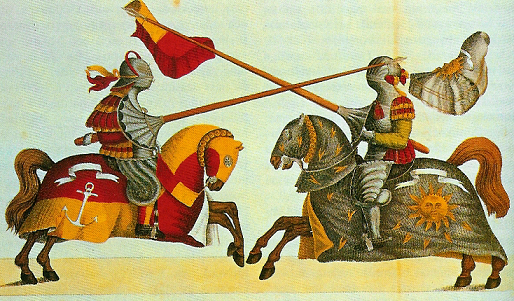