Built in the 13th Century, Topolcany Castle is located in Toplocany, Slovakia. Developed to utilize the Povazasky Mountains as part of it's defenses. A home to the family of Matthew III (a high ranking Hungarian Oligarch), they had the financial resources to build Topolcany into a massive and impressive structure. Quadrangular in design, it has a defensive perimeter wall completely encircling it. The Lower Bailey contained no interior buildings save the Guardhouse entrance. A second higher curtain (Mantlet) wall was built inside to enclose a Donjon style building.

Only 2 small defense Towers still exist from a possible 6 others. Topolcany had no Moated defense system. In the 15th Century, Hussite forces besieged and took Topolcany (and garrisoned for 3 years). In 1434, the Hungarians "ransomed" the Castle back to it's owners. Legend also tells of a rogue Hungarian nobleman who "took" Topolcany and set himself up as "Lord" in the region. Royal forces "evicted" him from the castle and exiled him to Moravia. In 1444, the castle was severely damaged by an earthquake. Partially repaired, it was badly damaged by several fires in both the 17th and 18th Centuries. Topolcany has been renovated and can be visited. 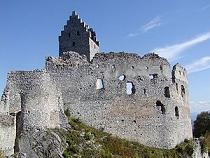 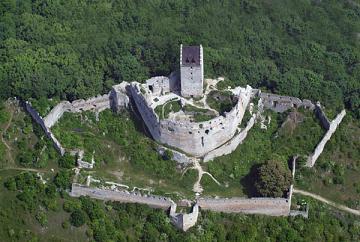