A Men's hairstyle that traces it's history back to the 7th Century AD, a Tonsure was the complete shaving of the Crown of a Man's head, leaving a "ring" of surviving hair that encompassed the head, slightly above the forehead. Originally adapted by Religious Orders, The Tonsure was used as a form of religious devotion with Monks, Friars and Priests. The average Commoner or Member of Nobility, did not adopt this style. As such, it became synonymous as a "badge of The Church".

Most Western Religions adopted The Tonsure (including Protestantism). There were actually two forms of wear. The first were Novices, who wore slightly more hair, often extending down into "Bangs". Older Men wore their Tonsure with less. In theory, The Tonsure was supposed to show one's disdain for "earthly fashion". Tonsure's actually lasted (officially) with The Western and Eastern Churches (in part), until 1972, making it the "oldest" Hairstyle continuously worn. 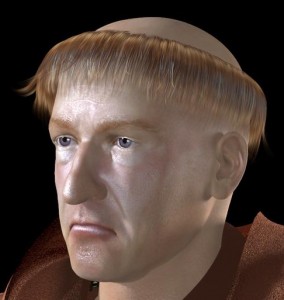