Tokens, are non-monetary devices (resembling coinage), which are used for both advertising and as Branding items, often redeemed at Venues for goods or services. Currently, most Countries that operate Public Transportation services, sell and redeem Tokens as a form of Fare. These Tokens are purchased in quantity as a way of “saving” money on overall Fares, particularly if one utilizes Public Transportation often.

Token use and their manufacture is actually hundreds of years old. The first usage was in Public Taverns as a way of inducing Patron to frequent a specific establishment. Such Tokens could be redeemed for a single drink or other service. Several times in US History in the 1830s forward, Tokens were made and illegally used as Legal Coinage.  In 19[sup]th[/sup] Century America, Tokens actually became a type of impromptu currency, one which would prompt The US Government into passing it’s first Counterfeit Currency Laws.

At the beginning of The American Civil War of 1861-1865, The Federal Government was in dire straits in finding funds to pay for what quickly appeared to be a long and protracted War. All Public Coinage was suspended for use by private Citizens, as a way of preserving the precious metals and materials used. In 1863, an enterprising New York City Bar Owner, Gustavus Lidenmueller used his own funds to have privately minted Tokens which closely resembled Federal Currency. Entering into Contract with local Bankers and Public Transportation Administrators, his “Lindenmueller Tokens” were accepted as both currency in his establishment and as a form of currency within The City. A rush on redeeming the Tokens led to Lawsuits in which Lindenmueller could not be found guilty of violating and Law (for one did not exist). Also, many other US Cities were using Tokens for a form of legal currency to defray the lack of actual coinage.

The Federal Government passed The Coinage Act of 1864. In short, The Act forbade any further minting of Private Coinage for use as Public Tender. However, Tokens were still made, only done so as to not resemble any Current Legal Coinage. Patriotic Tokens were used by Civilian Sutlers (Army Suppliers) and “sold” to Soldiers to redeem at their Stores for goods. Most Tokens were made of good quality and were still (illegally used). Government enforcement was spotty at best, but with heavy fines for minting Tokens for use as currency, Tokens usage slowly changed to more acceptable patterns, none of which resembled US coinage. 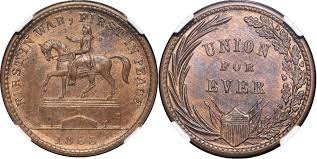