The Tipi (sometimes spelled as “Tepee”), was a type I’d Native American dwelling used mostly on The Great Plains of The Western United States. Often, the term “Tipi” is misconstrued to be associated with all forms of  Native American living structures. While all Tribes used some form of dwelling (permanent and temporary), The Tipi was indicative to The Sioux Nation. Possibly Centuries old in design, Tipi construction remained unchanged with time. Conical in shape, they were made with many dried Buffalo hides. A typical Tipi may involve as many as 10 to 15 for a modest sized structure. Once the hides were suitably cleaned and dried, they here hand stitched together using leather lashings or dried animal muscle sinews (again coming from the vaunted Buffalo).

The basic conical design of The Tipi came from a series of Lodge Poles, most often made of Pine (the predominate Regional wood). Each Pole wad 12 to 15-feet in length. The Poles were hand smoothed of imperfections . Most often, they were reused with each build. The Poles were arranged in a conical shape, with each end overlapping at the top. This conjunction was then lashed together for stability. The top of the hide Shell featured a pair of flap openings at the very top. This opening was 2 to 3 feet. The aim of these flaps, which were left open, was to facilitate the removal of smoke from the inside of The Tipi during cooking and heating. An additional opening was afforded at the Front of the structure which provided for entrance and ventilation as well.

Some larger Tipi feature support of guide lines, used to stabilize the structure to the ground, in the same way a Tent would be. The general diameter was circular in shape at the bottom and measured around 12 to 15-feet. In regards to cooking and heating, the aforementioned Upper smoke flaps served the purpose of drawing up cooking smoke, via an upper draft created when the “door flap” was opened. Amazingly, most Tipi remained “smoke free” inside because of this technique.

Whereas The Sioux were migratory, moving with The Seasons and Buffalo Herds, Tipi construction was temporary. A typical “Camp” was erected for a 3 to 4 month Period. When it was time to move The Tribe, the Tipi could be disassembled easily and packed for transport. Any damages sustained, such as tears or rips – could be easily repaired. The job of construction was left to the Tribal Women. Each Woman was responsible for construction. In cases of Elderly and older Females, other Women of The Tribe would “pitch in” and help. Young boys, not yet training to be a “Man”, would help in it’s erection as well.

Tipi were generally not decorated on the outside, but some examples were, especially with Warriors who had distinguished themselves in battle. Traditionally, when a young Couple married, the Bride’s Family presented the newlyweds with their first Tipi. The Tipi was also used for religious purpose, serving as a location were Warriors and Tribal Elders could purge their “Spirits”, before making Tribal decisions of great importance ( as in War). Used as a Sauna of sorts, these “heated” Tipi were known as “Sweat Lodges”.

The size of a Tipi was mostly standard, with the largest being that of The Chief or Leader of The Tribe or Clan. The second went to that of The Shaman or “Medicine Man”. Next in line, went to the most strongest and most renowned Warrior of The Tribe. Still erected by Traditionalists for Ceremonies within The Sioux Nation, The Tipi can still be seen as a fine example of Native American Culture, even today. 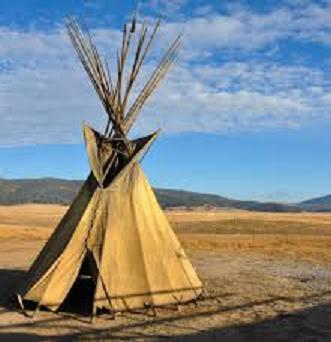