Originally built as a defensive position near The Thames River (and to London), Tilbury can trace it's usage as a fortification to around the 14th Century. A more permanent structure for defense was constructed during the reign of King Henry VIII. The ever growing threat of invasion from Spain prompted renovations under commission of Queen Elizabeth I (around 1588). Designed in the Star Fort and Vauban style, Tilbury featured man Horn Work innovations. The original garrison was around 60 men. The Fort relied heavily on cannon and artillery emplacements (having it fall firmly into the class of Device Fort). 2 Powder Magazines were able to hold over 3,600 pounds (in barrels), each.

Tilbury also served as a prison, holding many captured Jacobites from Culloden (1746). The Fort held over 300 cannon of different poundage over the centuries. Tilbury fell into both Royalist and Parliamentarian Forces during The English Civil War. It was not slighted. The defensive structures were again renovated and improved with The Napoleonic Wars of the 19th Century. Better Curtain Walls and Bastions were added. It also featured a Wet and Dry Moat system. Tilbury continued as a defensive position well into World War II. Although much of it's size has been diminished, some of it's 16th Century defenses still stand today. 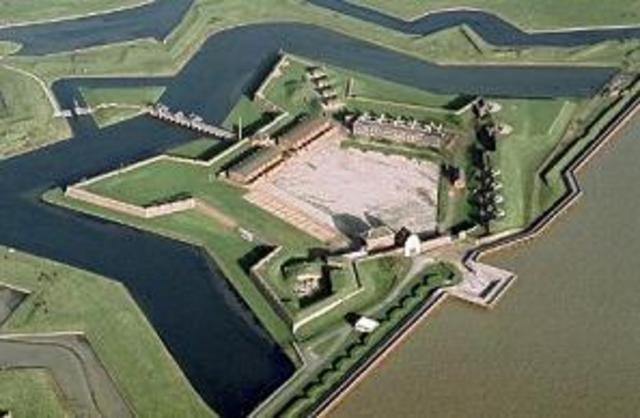