An Ancient Thracian Greek City-State Blade/Pole Arm weapon, The Rhomphaia was developed around the 4th Century B.C. The weapon had a long (2.5 foot), single-edged blade attached to a 3 to 4 foot wooden handle. Compared to the later developed European Glaive or even Scythe Sword, The Rhomphaia was made of iron and often used with two hands in an “”overhead” or “downward slash”. The weapon was heavy enough (15-pounds), to seriously damage most light to medium Armor worn. When Roman Legions eventually conquered Greece and it's surrounding Territories, the use of The Rhomphaia was so terrifying, that it prompted them to redesign their Armor (a fact that they did this only once – testified to the Rhomphaia's effectiveness). 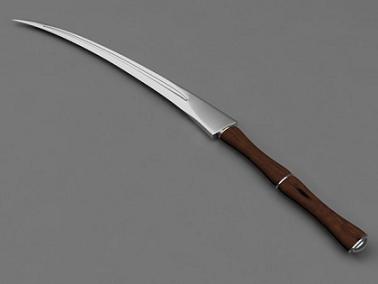