Born to a middle-class Norman Family in 1118 A.D, Thomas grew up in the time of “Saxon Rule”. A meshing of the two “races” was well off. Saxons were viewed as Overlords by many Britons. Still, securing a stewardship to a wealthy Saxon Lord was more than desirable to Thomas' family. Taken into the household of Theobald, Thomas was sent to Bologna to study Law. Becoming a well versed, it was seen that he also had an aptitude for Theology. After some connections were made through The Church, (Theobald was after all, just made Archbishop of Canterbury) - Thomas was made an Archdeacon in 1154. Although a religious position, in those day, an Archdeacon still retained much of his “earthly life”. Thomas was found of good food and drink (and of course – women).

Finally introduced by Theobald to King Henry II, Henry saw in Becket a shrewd political move. He elevated this “lowly Briton” to the position of Chancellor. Unheard of, many Saxon Lords and Baron's were upset with this appointment. But Thomas was also seen as a fair man (and soon becoming The King's favorite). Sent to Toulouse, France in 1159 to oversea Henry's “wars”, Theobald died. This gave King Henry the idea to install Thomas as Archbishop. Although never a Priest, Thomas underwent a quick and rapid succession of rituals (withing several days) – so that he could assume the post. Many in The Church feared that Thomas's closeness with The King would influence his role as Archbishop. Henry was near broke from his wars, and had threatened to raise a special take on Church Property (possibly assuming Thomas would enforce such).

To everyone's astonishment (even Henry) – Thomas took his position seriously. It was said that he gave away much of his fortune to the poor in preparation for his position. Thomas began to attack Clerics who were lazy or corrupt. He cleaned up The Church (in England). However, bad times came for Thomas and King Henry. By the King's law, if anyone committed a crime, they must be bound over to “the King's Justice”. However, The Church had their “own law”, whereby any Priest or Cleric who committed a crime would NOT be bound over to “local justice” (being tried and punished by Church Law). After an incident where a local Saxon Nobleman had killed a Priest (and Henry refused to surrender him over to Becket) – Becket promptly excommunicated the man (a fate worse than death in those days).

In response, rather than have Thomas consecrate Henry's Son as King (as was tradition), he had The Archbishop of York perform the ritual. This was the final break for the two. A drunk King Henry in 1170, told 4 of his closest Knights, that he “wished to be rid of that troublesome Bishop”. Historically, many feel that no matter how upset with Thomas that Henry was he would not have killed him. His Knights however, saw this as serving several purposes. First, they had not liked the favor that The King bestowed upon Thomas. In no time, their “”rift” would end. And second, their Lord would never directly “order” them to do it (in so many words).

On December 29, 1170 – while Archbishop Thomas Becket was performing private Mass, the 4 Knights struck. They hacked Thomas to death. The King quickly had the 4 executed. The incent shocked not only Rome, but the whole World. Thomas was canonized as a Saint in a record 3 years after his death in 1173. This was seen as Rome sending the message that Henry had in fact authorized the assassination. The only way to keep his soul from excommunication (Rome said), was for Henry to perform Public Penance. Being a King, that was impossible. IT was decided that he should flog himself in front of several hundred Monks, Friars and Priests – in front of Thomas' crypt. The King complied. 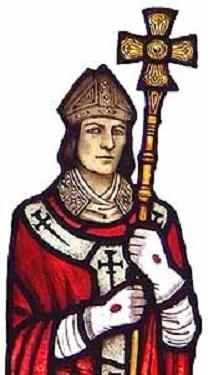