Born in Sicily in 1225, Thomas was born into “middle class” Nobility. Most of his family pursued military careers. Thomas' father however, decided that he should follow his Uncle (who was a Benedictine Abbot) – into a religious life. Sent at 5 years old to Monte Cassino, he soon left due to the war between Frederick II and Pope Gregory XI (which split over into the Region of Cassino). For his safety, Thomas moved to Naples. There he was taught Arithmetic, Geometry, Astronomy and Music. At 19, Thomas joined the newly founded Dominican Order. His family was furious that Thomas “switched” his loyalty from The Benedictines. Kidnapped by his own family, he was held prisoner for 1 year at one of his families castles. All measures where used to persude Thomas to leave The Dominicans.

Thomas was finally assisted by a family member (who helped him escape to Paris). While there, Thomas began to study and teach Theology. From 1245 to 1259, Thomas spent his “off time” writing books on Theology. His books dealt with God and The Human Condition. His style of writing made the understanding of both – something unknown at the time. No longer were religious doctrine and dogma written vaguely. The Pope in Rome (Urban IV) was very impressed with Thomas' work. He began to write works on Theology for the Papal Library. He was set up to teach many of The Clergy in Rome. He remained there until 1265. He went back to Paris to teach and was instrumental in fighting the rising tide of Averrorist and Aristotelian beliefs beginning to plague The Church.Leaving Paris in 1272 – Thomas went on a “lecture tour” of sorts. He visited Naples and Sicily and spoke to gatherings of Clergy and other religious.

He advanced Christian ethics and theology well past anyone of his Era (or likely even after). Much of his writings were so profound, that they helped build many of the foundations of Church teachings for some 500 years. Thomas died in 1274 in Fossanova (The Papal States). His canonization to Saint was very quick at 50 years (with no recorded miracles). This caused some debate in The Church. Declared a Doctor of The Church (Theology), he is honored by Catholic and Protestant Faiths alike. 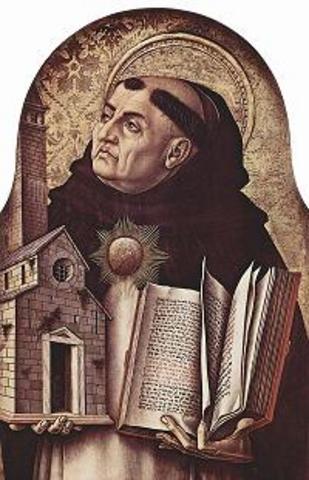