Quite possibly the first known attempt at Bio-terrorism, The Yellow Fever Plot of 1864 was conceived by none other than a Physician! Dr. Like Blackburn was a Confederate sympathizer, living in Federal occupied Kentucky. He developed the idea of causing an epidemic of the deadly disease Yellow Fever, by finding a way to bring the infection to several Eastern Seaboard Northern Cities as well as Washington DC  (even hoping to infect President Abraham Lincoln).

Dr. Blackburn had read in newspapers of yet another outbreak of the mosquito-borne illness in The Caribbean  (namely Bermuda). Secreting himself out of Kentucky, he made jus way to Richmond, Virginia - to bring the plan to Confederate President Jefferson Davis. History does not record IF Davis agreed or sponsored Blackburn action. Nonetheless, Dr. Blackburn boarded a blockade runner and sailed to the island of Bermuda. Visiting a Yellow Jack Hospital ward, he gathered up 5 large steamer trunks filled with clothes and bedding used by sick (and of course, deceased Patients). His goal was to ship 1 trunk to Philadelphia, 1 to Boston, 1 to New York and 2 to The White House in Washington DC - addressed to Lincoln himself!

It is unknown if some alert Harbor freight Inspector put "two and two" together with regards to the epidemic in Bermuda, but none if the trunks were opened at their destinations (although the 2 destined for Lincoln DID reach Washington).
Dr. Blackburn (having returned to Kentucky), poured over newspaper after newspaper in hopes of finding out if his plan had succeeded. It did not. Angered (more for the lack of support by Confederate Authorities)  decided to "turn" loyalties and "confessed" his attempted crime, stating it was all a plan sanctioned by The Confederate Government. The Federal Government did not believe him. Imprisoned until after the War, Dr. Blackburn ran unsuccessfully for Governor of Kentucky. He died in 1878. History never recorded what the final disposition of the steamer trunks. 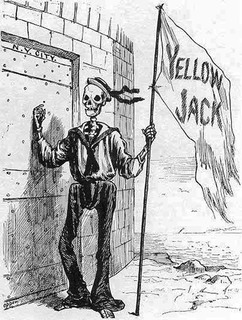