The Cathars were a Religious following that existed during the 12th thru 14th Centuries AD. They were seen as Heretical by The Roman Catholic Church for their Gnostic Beliefs. Some Historians cite that Catharism was the motivating factor for the creation of infamous Religious Judicial body known as The Inquisition. So prolific in their Movement, that an actual Religious Crusade was mounted by The Church to destroy The Cathars (known as The Albigensian Crusade of 1209-1229 AD).

Most Cathars were rounded up and killed – even without benefit of Trial. Those captured were either tortured to death, or allowed to recant their ''Sins''. In this case, these Persons were ordered to wear The ''Yellow Cross''. This was a cloth or linen patch in the shape of The Christian Cross. It was worn on the outermost garment, in plain view. This image told all that the person before them was a Former Cathar (which still allowed them to be further persecuted). The ''Yellow Cross'' was not seen after the 15th Century AD. 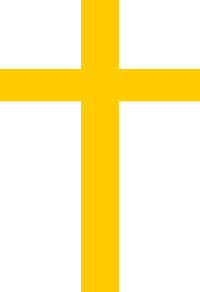