While a Gun Holster may not be considered the mpst important piece of equipment for a Western Law Enforcement Officer or even Outlaw, Holsters were no doubt even more important that the Gun itself in some cases. A Holster would either ''make or break'' a Gun Fight or Bank Robbery.

The evolution of Holsters used to carry a variety of Handguns – can be traced to the beginning of Firearms technology. However, the first ''true'' Holsters can be seen during The English Civil War of the 16th Century. Many of these Holsters were actually wooden cone-like scabbards mostly covered in heavy cloth. They would not last as well as leather did (to the extreme battlefield conditions) – so soon leather became the primary material in manufacture.

The function of a Holster is to carry a handgun – normally, on the Hip of The Carrier. Enclosed in a holster of leather, allowed for the weapons to be kept dry and relatively dust and dirt free (all elements which could effect the operation of The Weapon. But the element of speed began to develop. A weapon needed to be withdrawn quickly (especially in terms of self-defense).

With most Holsters being used and designed for Military use (in which speed was not necessarily a factor) – by the end of The American Civil War (1861-65), Western migration began in earnest. A handgun was seen as a vital component for life in Territories with little to no Law and of course the increasing threat of attack by hostile Native American Tribes.

The development of true Western Holsters (1870s) establish a series of Types (Models) often preferred by those who made their ''living'' with ''a Gun''. Often custom made and expensive (often as much as the Guns they carried) – the following series of Articles will outline the different type of Holsters used between 1870 and 1900. 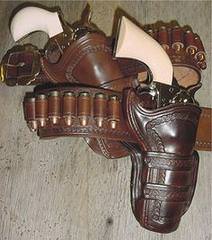