Although not a specific battle, The Wendish Crusades of 1147 were part of The Northern Crusades and fits into the history of The Second Crusades. The campaigns were led by The Kingdom of Germany and directed by The Holy Roman Empire. The Crusade centered around the subjugation of the Polabian Slavs (Pagan), also known as Wends - into Christianity. Around the 11th Century, German Church Authorities sought today conversion of all region under their control not aligned to the Church. Converted peoples become able soldiers and their wealth (if any), powers Royalty.

Armies had been raised already for the The Second Crusade to The Holy Lands. It was only natural to use them in the region first. With the Pope in Rome's blessing the Crusader armies marched. The Slavs raised as good an army as they could, under command of Niklot. Unable to stand against a well supplied Crusader army, he had to resort to hit and run tactics, drawing the Crusaders into marshlands and swamps (locations very much unfit for armored knights). The Crusaders were able to convert some towns and villages, they could not subdue the whole region. Niklot had some minor success, but not enough to turn the tide. The Crusaders had complete control of all ports.

Towards the end of the Crusade, non-conformists had their homes burned and whole populations killed. An example would be the massacres at Meklenberg and Pomerania. It was noted that the Crusaders main problem was that they "used the Sword and not The Bible". Often, the smaller Crusader armies thought more of riches and less about conversion. Niklot's other problem was the people's half-hearted support for their cause. The Crusader armies would have to leave after the year of terror, for their primary missions in The Holy Lands. The Crusades was a wasted effort. Many areas simply reverted back into their Pagan beliefs after they left.  Niklot (now paying tribute to the Roman Emperor), was no longer an issue. Many Saxon lost territories were reclaimed. The Slavs were stripped of much wealth and resources as a result of the Wendish Crusades. 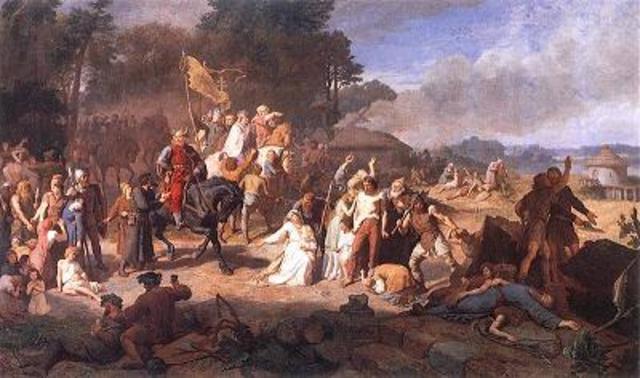