The Sword of William Wallace

Real (and made more so by Mel Gibson's "Braveheart"), The Wallace Sword is a Longsword classification of weapon. Made around the 12th Century, it is roughly 5 feet 4 inches long and weighs 6 pounds! An oversized "two grip" handle and large pommel completes the weapon. Designed with a "sleeve scabbard" (due to it's large size.)It is currently on display at The Wallace Monument at Abbey Craig, near Stirling, Scotland. The sword had been hotly debated for centuries with regards to it's authenticity. Many feel that most of the sword was replaced and refurbished over the centuries (so much so that it's no longer the same sword). Whichever version, the thought of this huge monster of a sword slicing through the English ranks at Stirling or York stirs the imagination. 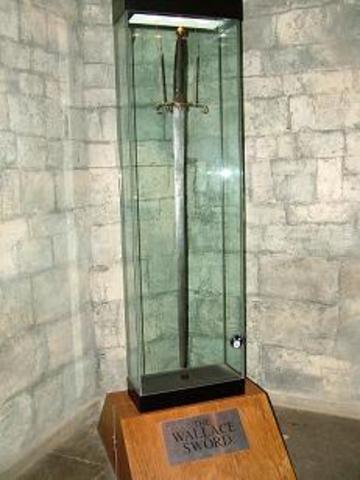