The Sword of State of Scotland

Known as The Honor of Scotland, it was a Papal gift from Pope Julius II to King James IV - in 1507. It is of the Longsword classification of weapons - being at 4.5 feet long. It's blade has an engraving of Saints Peter and Paul (as well as bearing a message of greeting from The Pope). It's handle is extremely ornate. A solid silver hilt handle was shaped to resemble oak leaves and acorns. The sword is an excellent example of Italian sword craftsmanship. It's legend is, that to keep it from falling into the hands of Cromwell's forces (during The English Civil War of 1642), the blade was broken into two pieces (in order to hide it better). It was hidden so well, that it became lost to history. In 1814, the sword was finally recovered and repaired. It was used to open every Scottish Parliament from 1815 onward, but this practice was stopped due to the blades age and fragile quality. The sword has been on public display continuously (from 1815) - with one exception. During World War II, it was again "hidden" in case of German invasion. 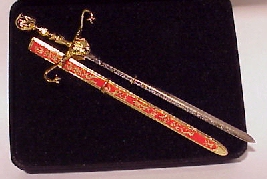