The Sword of Muhammad

According to Muslim tradition (and legend), The Prophet Muhammad had 9 individual swords (each with names), all taken supposedly as "war loot". He would give out some of these swords as gifts to his most trusted commanders (during The Muslim Civil Wars of the 5th Century). Most of these battle blades are accounted for (historically). His "personal" weapon was The Sword of The Prophet or Al-Battar. The blade is 35-inches long and weighs 2 pounds. Inlaid with pure gold filigree, it's scabbard is wooden and covered in leather. The blade is inscribed (in Arabic), "Muhammad is The Prophet of God". All 9 swords have some form of religious engraving present. His weapons were kept for over 400 years in Alexandria, Egypt. They were removed to Istanbul, Turkey and have since been on display at The Topkapi Museum. 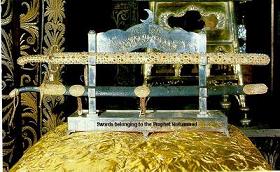