The Sword of Marshal Ney

Michel Ney was one of "The 18 Marshals" created by Emperor Napoleon I of France for his Grande Armee. Napoleon's plans for domination centered around these talented commanders. Ney started out as a humble Hussar (light cavalry), and worked his way through the ranks. The fierce artillery duel at Valmy as well as The Battle of Neerwinden would give him his Officer's Commission. His defense of French artillery from an attack of Austrian Lancers (inclusive of his capture by them and his eventual exchange for an Austrian General), would cause Napoleon to make him a Divisional General. By 1804, Ney had distinguished himself in so many battles - he received his Field Marshal's Baton. He participated in the ill-fated French invasion of Russia, in which he and his cavalry were the last Frenchmen to leave Russian soil. It was also Ney, who convinced The Emperor to surrender his throne and go into exile. He was rewarded for these efforts by King Louis XVIII. When Napoleon escaped from exile, it was Ney and his troopers who were sent to capture him. Upon making contact with Napoleon, he was convinced  to re-join him. Ney's greatest moment was at The Battle of Waterloo in 1815. He personally led a massive cavalry charge against The Duke of Wellington's "English Squares". Ney failed to capture the English artillery OR break the Infantry Squares. It was said that he had 5 horses shot from under him that day. After Napoleon's second capture and final exile, Ney was captured by the new French Government and executed by firing squad. It was said that Ney himself gave the order to fire. Ney's sword was sold at private Auction. It is a 1790s French Cavalry Officers Saber. It is 40-inches long, single-edged and features the popular Mameluke handle and grip, in the classic "D" guard hilt. It has a blackened steel scabbard. 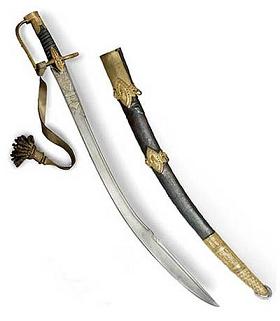