The Sword of Marshal Murat

As Napoleon's Marshal of Cavalry, (and also Admiral of The French Navy), he was The Emperor's brother-in-law. He was also The King of Naples (1808-1815). He had a reputation as a flamboyant dresser and brave cavalryman. Napoleon titled him "The First Cavalryman of The Empire" for his amazing feats at Leipzig, The Russian Invasion (although a failure) and The Peninsular Campaign. After Napoleon's fall from power and exile, he fled to Corsica (in attempt to regain his throne). Captured by troops of the "current" King of Naples (Ferdinand IV), he was tried and executed (by firing squad). Although he no doubt owned many Ceremonial and Presentations Swords and Sabers, on such Saber was positively identified as had being owned and used by him. Held by The Sotheby Auction House, (having been consigned to sale by an 8th generation family relation) - it was sold at private auction. The blade is a standard French Cavalry issue of the early 19th Century. It is 43-inches long (slightly curved). It features a Mameluke style hand grip (popular at the time). The handle is ivory, with a "French Lion" brass pommel. The scabbard is plain metal. 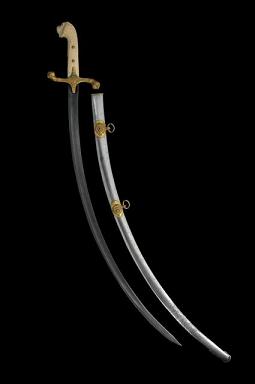