The Sword of Marshal Blucher

Marshal Blucher was one of the most decorated officers in his Country's history. As Prussian, he was well trained at an early age in the military arts. He was a known and gifted Hussar (light cavalry). Blucher also had a reputation for intense aggressiveness in combat (which he instilled into his troops). He was a major participant in The Napoleonic Wars. He formed an alliance with The Duke of Wellington during The Hundred Days War (which would lead to Napoleon's downfall). His was one of the first Armies that continued the pursuit of the broken French Army all the way into Paris. Although his actual sword is lost to history (or at least undiscovered), his sword would no doubt have been a Prussian Model 1796 Officers Sword. Somewhat plain and unadorned, they featured a 37-inch blade, with a brass "D" shaped guard as a hand protector. A plain brass pommel was also attached. A blackened steel scabbard would also have been used. Most often, blades of this classification (and being Prussian), would have had Regimental symbolism engraved into the blade. 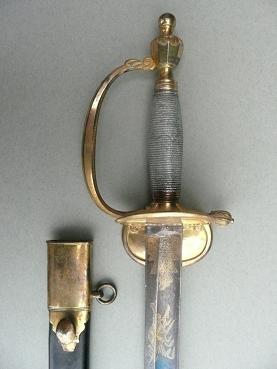