The Sword of Lt.-Col. GA Custer

Much has been written (for and against) this controversial American General (although called "General", he was actually a Lieutenant-Colonel. He was given an honorary Brevet rank of Major-General in The Civil War). He was not a particularly good student at West Point, He was however a "risk taker" and his risks often payed off (more than failure) - during the war. After The War Between The States, he was assigned to The American West as a cavalry officer (tasked with subduing the Native Americans). Through political "pull", he was able to secure command of the 7th US Cavalry. The US entered into a war with The Lakota Sioux (and Allied Tribes) - that would eventually lead Custer and his command of 256 men into The Battle of The Little Big Horn (Montana), and the death of all of them. As a decorated officer, he would have been awarded many Presentation and Ceremonial swords (A Tiffany-made Sword is one, as well as a Service Sword he gave as a gift to his Eldest brother (sold to a private collector). Custer's actual sword from the battle is lost to time. After the battle, (and as was custom), the victorious Sioux stripped the bodies of the fallen cavalrymen of ALL goods and weapons. Nothing was left but naked mutilated bodies. Whoever took Custer's sword, may not have even known it belonged to the Great "Yellow Hair" or "Son of The Morning Star" (as The Sioux called him). What is known is that - in spite of Custer's known "pomp and brag", he was a practical field solider. He would not have used a flashy officers blade. More than likely he would have used the same weapon as his troopers. This would have been the Model 1870 Cavalry Saber. At 40-inches long, it was a single-edged blade with a solid brass half-basket hilt guard. About 2.5 pounds in weight, the handle was leather (wrapped in wire). The scabbard would have been steel or brass composite. 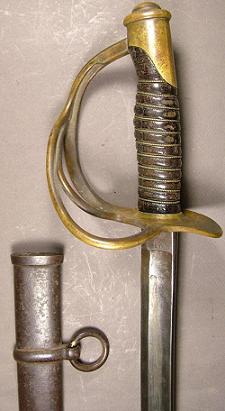