The Sword of General John Pershing

US Army General John J. Pershing had a long and colorful career in his Country's Armed Forces. He graduated from The US Military Academy, at West Point (New York), in 1886. He served as Commander of the Honor Guard on former President Grant's funeral. He was assigned to the US Cavalry and saw action against The Apaches and Sioux Nations. He was also one of the few "white" Officers selected to command the 10th US Cavalry (an all African-American Unit). Pershing stated that he saw no difference (at a time when most people were against his opinion). He would fight in Cuba during The Spanish-American War and The Philippine Insurrection. He was actively engaged against Mexican Bandit Pancho Villa and his incursions into Texas (leading an Expeditionary Force against him and almost starting a Second Mexican War). When American become involved in World War I, Pershing (now Commanding General of all US Forces), was sent overseas to France. There, he uttered the immortal line "Lafayette, We Are Here!". His tactical abilities helped to turn the tide of the war in favor of an Allied victory in 1919. Although he had many swords, his most cherished was his Model 1902 Army Officers Sword. Given to him as a gift from the State of Missouri (US) well wishers (upon his promotion to full General), the blade is 44-inches long. It has an 18k gold hilt and scabbard. The scabbard is engraved with his personal military history. This sword is currently on display at The US Military Academy Museum, West Point, New York. 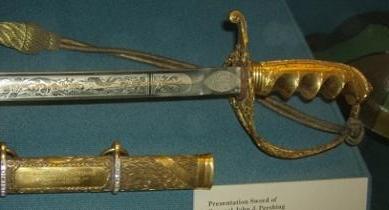