The Sword of General JEB Stuart

Confederate Major-General James Ewell Brown Stuart (JEB)  was the flamboyant Commander of Cavalry for Gen. Robert E. Lee's Army of Northern Virginia, during The American Civil War (1861-1865 ). His daring exploits did must to inspire Southern morale. A true Cavalier, Stuart espoused the "virtues of Chivalry". Noted for his customers made uniforms and habit of wearing "colognes", his "Dandy appearance" was not compared to his abilities in the saddle.

A West Point Graduate, Stuart proved an able Indian Fighter and served in Kansas during it's period of pre-Civil War conflicts known as "Bleeding Kansas". He also assisted then Col. Robert E. Lee with the capture of Anti-Slavery Radical John Brown at Harper's Ferry (1859). Resigning his Commission in 1861, Stuart filled several positions within The Confederate Army until his appointment with The Army of Northern Virginia.

Stuart was a master of Reconnaissance, but a series of miscalculations would lead to his delay at The Battle of Gettysburg (which helped cost Lee the battle). Stuart would go one to served with distinction until he wad mortality wounded at The Battle of Yellow Tavern (1864). Gen. Stuart carried an 1869 Cavalry Saber, which was 37-inches long. It was kept by his Wife until her death. It is currently kept by The Museum of The Confederacy in Richmond, Virginia. 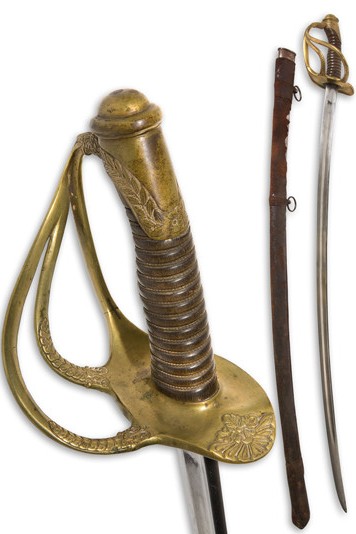