The Sword of General Andrew Jackson

One time US House of Representative and US Senator, a Governor and Soldier and later 7th President of the United States, Andrew Jackson was one of the most "colorful" of all US Presidents. Outspoken and controversial, Jackson and his Administration were behind several actions still debated even today. As a Major General of Militia (Tennessee), Jackson was propelled into National attention as Being in charge of defenses in and around the City of New Orleans, during The War of 1812. Holding his line of just cotton bakes and mud parapets against The British advance, it was this Sword carried by him in the battle. Rather ornate for a battle Sword  (but we'll in keeping with his "larger than life" personality), it was a 1790 Pattern Officers Model  (based on British Models). It wad 43-inches long and featured silver and gold inlays. A sloping "D"-Guard and Hilt, Jackson also carried this blade during The Creek Indian War and other engagements as well. The Sword is currently on display at The Smithsonian Institution, in Washington DC. 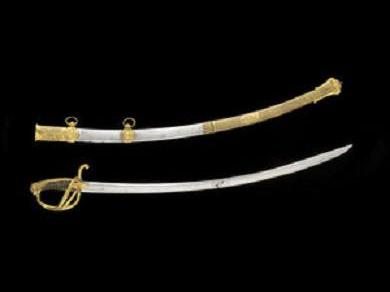