The Sword of Erik The Red

Erik Thorvaldsson (aka Eric The Red), was a famous Norse Chieftain and warrior whose exploits or "Sagas" were legendary. His sword (probably made around 970 A.D.), would have been the typical "Spatha-type" blade (2.5 to 3 feet long). The handle would have had the standard oversized roundel/pommel (which would have been an ideal striking weapon itself). As with most Norse blades, it would have been double edged. Being the sword of a Chieftain, it would have been honed from an iron-metal based composition. It would have been stored in a wooden scabbard covered in seal skin or leather. One legend had his sword made of silver. It's whereabouts after his death is unknown. 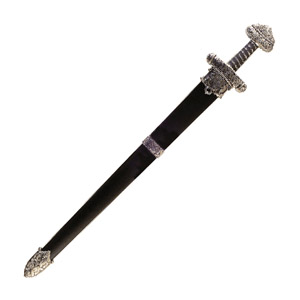