The famed “Swamp Angel” was a nicknamed Parrot Siege Gun, used by The Union Army to bombard The Confederate City of Charleston, South Carolina – during The American Civil War of 1861-65. The Rebel City of Charleston was still determined to resist Federal occupation. So much so that once Federal Fort Sumter in Charleston Harbor, regularly bombarded Federal positions around The City.

Union General Quincy Gilmore had enough of this problem, and ordered on of the largest Parrot Siege Guns to be cast, in order to not only attack The City of Charleston, but harass Fort Sumter itself. The resulting Gun was named “Swamp Angel” (due to it’s deployment deep in the surrounding South Carolina Swamps.

The Copure (Firing  Position) took 123 pieces of 15-inch Pine and supporting sandbags number over 13,000. 300 pound 4-inch Pine and Iron Spikes were positioned around The Copure for protection against the possibility of Infantry attack.

Made of cast Iron, “Swamp Angel” had 11-barrel grooves with an 8-inch diameter. Her Barrel weighed 17,000 pounds. Each of her Shells weighed 150 pounds (with 16-pound powder charges) and they could reach 8,000 yards at 35-degrees. The massive “Angel” fired 36-shots before he barrel burst. It was long thought that she was left in the Swamp to rust and vanish. However, The City of Trenton, New Jersey acquired her in the 1890s and restored her barrel, which is still on display in Cadawallder Park, Trenton New Jersey. 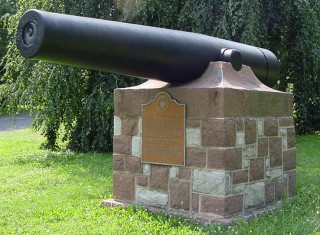