The National Anthem of The United States known as “The Star Spangled Banner”, was not always so. It’s History is traced directly to The Conflict that raged between England and America, known as The War of 1812. It was within the first year of that contest, that a little known American Lawyer (and amateur Poet) named Francis Scott Key, witnessed a lesser known battle of that War, and set words to paper of what be saw. This observation would lead to the Anthem, now so well known.

It was September 14, 1814 and British Naval Forces were assaulting Baltimore  (Maryland) Harbor. A pivotal key to The Harbors defense wad the American Fort, McHenry. The small but stout brick Fortification needed to be removed to ensure a successful British invasion of The City.

Dogged and determined, American Forces fired their Artillery at the better equipped British Navy. Peppering The Fort with Shell and Rocket, McHenry took on a surrealistic appearance. Scott Key (along with several others), were on a Government approved Prisoner exchange Mission with The British. However, with the start of operations against The Fort, Key could not very well be allowed to go – for fear he would betray The British positions. He was aboard The HMS “Minden” when the bombardment began.

His observations of the battle became known as “The Defense of Fort M’Henry”. It quickly became a very popular poem. Scott’s Cousin – as a lark, set it to a melody. It was mildly popular even after The War, but never quite rose to the stature it would generations later. Up to this point in American History no set National Anthem had been adopted. The two most used for formal National Ceremony were either “Hail Columbia” or “My Country, Tis of Thee”.

“My Country, Tis of Thee” was actually in the running for National Anthem, but it bore one slight problem. The melody of the song was in reality Great Britain’s National Anthem – or “God Save The Queen”. This obviously created an issue for America. The United States Navy (1889) and later The US Army (1892) began to use it unofficially. President Woodrow Wilson too made it unofficial 1n 1916. Yet still, Congress did not officially make it The National Anthem until 1931.

In light of the recent controversy with The Anthem and protestations by American Sports Teams, it should be noted, that other than The United States Military, the act of standing when The Anthem is played is too a matter of relatively modern History – with regards to it’s Citizens. After The Japanese attack on Pearl Harbor in 1941, Major League American Baseball Leagues began to play The Anthem prior to the start of the scheduled game. Announcers began to aske Attendee’s to stand and to both remove hats (for Men) or the placing of the right hand over the heart. It was seen as rendering respect for America’s battle loses during The Attack. The “habit” caught on and became the norm.
Although the wording is well known to Americans, most only know the first stanza, which is the most commonly sang and performed. Traditionally, there are 4 such stanzas. 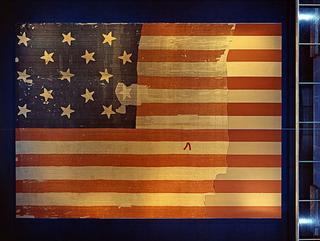