The "Speedwell" was the sister Ship to the much storied "Mayflower". Both ships were destined to take Pilgrim Separatists on their voyage to the then New World (landing in what would become Plymouth, Massachusetts Colony). The less known (but equally important) "Speedwell" was originally christened The "Swiftsure" in 1577. A Pinnacle-Class warship. Listed as a 160 ton displaced, 110 foot long vessel, she featured 4-decks. Square-rigged (sail design), "Speedwell" was destined to be used against The Spanish Armada. Never used as such, "Speedwell" was given to Sir Gelli Mayrick (who was 2nd in Command to The Earl of Essex) - and used in The Earl's campaigns against Spanish interests in The Azores Islands (South Atlantic).  In 1605, "Speedwell" was decommissioned and sold to Holland. In 1620, Religious Separatists purchased both "Speedwell" and "Mayflower", for travel to The New World. Unfortunately, due to the age of The "Speedwell", some 100 miles out from The English Coast, a 100 foot leak sprang up in her hull below the waterline. Some passengers embarked to "Mayflower", others turned back to England. The "Speedwell" was repaired and would still make several more completed voyages, before she was eventually scrapped in 1630. 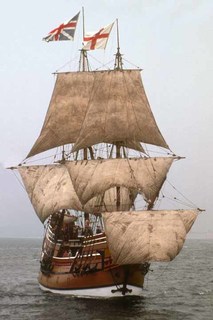