The Siege of Masada

Happening around 73 A.D. - Masada was an impressive mountain fortress in The Eastern Deserts of Israel. Originally constructed as a Palace for King Herod The Great, it was largely unfinished when the final Siege and fall of Jerusalem happened. Roman Legions under personal command of Emperor Titus, had finally swept through The City. After much damage (half the city was burned and untold thousands slaughtered), the City was Roman again. One surviving “zealot” group of resistance fighters known as “The Sicarii” (numbering around 1,000) – fought a rear guard action out of The City and into The eastern Desert. They occupied Herod's old Palace – known as Masada.

Roman Legions quickly gave pursuit. They soon realized however – the scope of the “fortress” of Masada. Commanded by Lucius Silva, he ordered a series of circumvallation walls to be build around Masada. It was though to “starve” out it's Defenders. While the walls were being constructed, hundreds of Roman soldiers were killed as the Defenders fired arrows, spears and sling stone onto their heads.
Needing the “issue finished”, Silva came up with a plan. He would build an earthen “ramp” from the bottom of the mountain Masada sat upon and lead it to “it's front door”. In this way, Silva could bring up heavy Siege engines and decimate the stone walls.

The ramp constructed was 1,968 feet long and rose up 200 feet into the air. As said, Silva ordered his Siege Towers brought up (with attached Rams). The Romans battered down the walls with ease. The soldiers had noted the total lack of resistance on the part of Masada's Defenders. Upon making entry however, the horrible truth was learned. Rather than surrender, the Defenders (all 960 men,women and children) – had killed themselves (or each other), rather than submit to Roman Rule! The Jewish Wars against Rome were over. 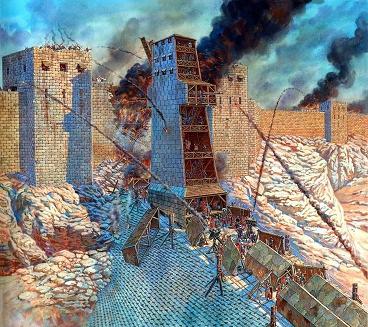