A Carrack-style vessel built around 1458, she was launched in 1460. The “Santa Maria” was roughly 52 feet long and around 18 feet high (beam). She may have displaced 150 tons. Wind powered, “Santa Maria” was the Flagship of two other similar vessels dispatched under commission of The King and Queen of Spain – to explore “the far side of The World” and located new routes to China and India for Spice and Commerce trade. The expedition was lead by Christopher Columbus (although he was not the Captain of the ship). “Santa Maria” also featured 4 Bombard style cannon of the 12-pounder range for self defense. Her crewing was around 40 men. Normally given a religious name (as was the custom of Spanish vessels in that Era) – hence the ship was named after Mary (Mother of Jesus). Of note, the ship was “recorded” as being called “La Nao”. The religious “christening” may have been to give the ship “good luck”. Successfully traversing The Atlantic Ocean and discovering The Caribbean (and related land masses), the ship is “credited” with the discovery of The New World. “Santa Maria” wrecked on a sandbar on it's return trip in 1492. Unable to repair the ship, she was stripped of as much usable material as possible. What was left sank the next day. Numerous sites have been touted as her wreckage, but none have been conclusively proven. 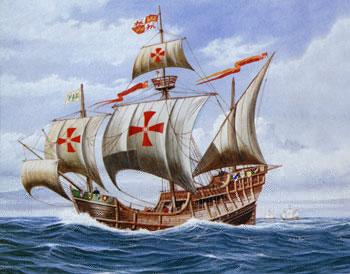