Built in 1841, The “Saladin” was an English Barque-Class of ship, used for cargo transport and import/export duties. She displaced some 550 tons and was around. 150 feet long. Tasked with transporting cargo from Chile (South America) to England, she was carrying Guano (for preparation in gunpowder), Copper, Silver bars and $9,000 USD in Gold coins. The “Saladin” is another story of tragic “high seas adventure”. Departing Chile in 1844 with her cargo, several of her passengers turned out to be a notorious Pirate Captain and his Son. Learning of the cargo (and it's worth), he and his Son worked the crew into a frenzy. They killed the Captain and all Officers (throwing their bodies overboard). The Pirate Captain next stirred up the “leaders” of the Mutineers to kill all non-essential crew members (to give them more of a share in the rich cargo). The remaining crew overheard The Pirate telling his Son how they would “finish off the rest of the crew”. The Mutinous crew turned on their fellow Conspirator and Son (throwing them overboard). Located some 8 weeks later adrift at sea by a British Warship, the remaining crew created an outlandish story of how sickness overtook the ship. Evidence was found to the contrary and the remain crew were imprisoned back in England, convicted of Piracy and hung. The wreck of The “Saladin” has not been found. 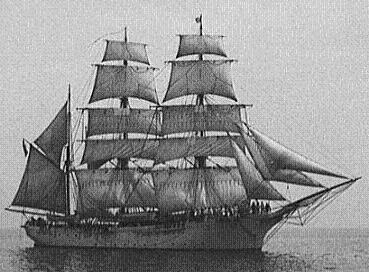