The Sack of Paris

Beginning on March 28, 845 A.D. - 120 Norse ships and 5,000 warriors under King Ragnar Lodbrok, sailed up the Seine River to the West Francia City of Paris. His goal was to loot the City of it's wealth. This was a daring and epic mission (which had not been accomplished by The Vikings before). Although The Frankish Empire had been attacked as early as 799 A.D. by Norse forces, Charlemagne had effectively stopped any further incursions via the Seine River by constructing various fortifications along it's way. In addition, large perimeter curtain defense walls had been established around Paris. Still successive raids in the early 830's A.D. (and a Frankish civil war in the 840s A.D.) - prompted the Norse to try again.
Having been "brought off" by King Charles (The Bald) with promises of land - he lied on his offer and withdrew it. King Ragnar was angered.

The Viking invasion force sailed up the Seine River with relative ease (despite several small skirmishes). Charles (hearing of their approach) may even have thought of simply giving the Vikings what they wanted. He was prompted by this due to have a small army (certainly not large enough to stop 5,000 men). Also, he knew that his Crown was no doubt in the balance as well. So. without much help, Charles decided to defend Paris. History has lost the exact numbers of Charles garrison (but some speculate it at 1,500).

Charles divided his army into two divisions (one on the attack and one in reserve). The reserve force would defend the walls of Paris (firing arrows and missiles down upon the landing Norse invasion force). Charles sent his other division across the Seine as bait to drawn the Viking army away from the City. It worked - in so much as the Vikings were able to land and completely slaughter Charles forces. The Vikings even took 111 prisoners and hung them from trees in plain view of the City walls.

Being too much for the wall troops, they fled their positions. Ragnar and his force simply marched into Paris, unopposed. They looted and burnt what they wished (concentrating on destroying Christian symbols such as chapels and churches). Charles had to do something. He bribed Ragnar with 7,000 pieces of silver and gold (telling him it was payment for lost lands he did not give). Ragnar was satisfied. Unfortunately his forces could not go one either. Many of his warriors had started to contract plague. They left Paris intact (more or less).

It has been speculated that had Charles tried to rally his forces, he may have been able to stop Ragnar and his weakened men. Paris was spared from further attacks. Of note, this and the previous attacks had prompted many complaints and concerns from other nearby Kingdoms to Rome. In turn, The Holy Roman Emperor began a series of massive missions to Christianize the Norsemen. It would work over the next several hundred years. 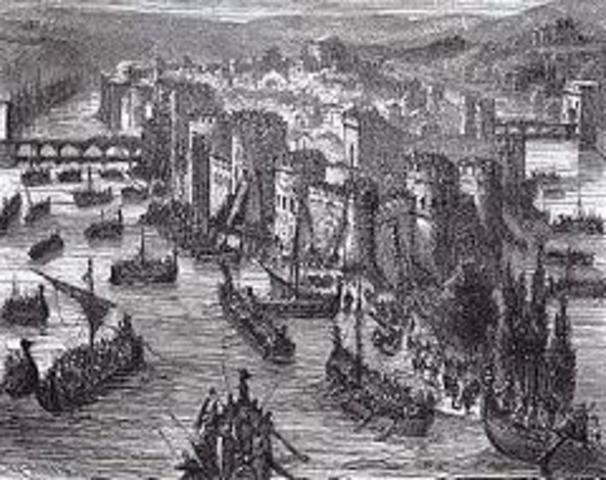