The Sabre of Charlemagne

Legend stated that King Otto III opened the grave of Charlemagne in 1000 A.D. and found this sword next to his remains. This has been debated for centuries due to the fact that the weapon does not scientifically date from Charlemagne's Era. Of The Eastern European sword variety, the sword dates from the middle half of the 9th Century (Charlemagne died in 814 A.D.). Notwithstanding, the sword is part of the Aachen Royal Regalia of The Holy Roman Empire. When a King was installed, this sword was immediately attached to their persons. Found in an underground bunker complex at Nuremnberg Castle by American soldiers in 1945, it was returned in 1946. The sword is currently on display at Aachen Cathedral, in Germany. 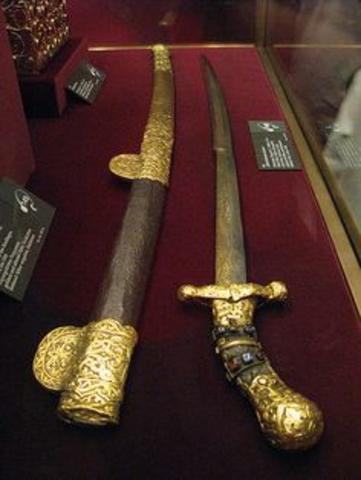