The principle form of travel on The Mississippi River in The United States for generations was by way of Steamboat. Inventor Robert Fulton pioneered this (then), revolutionary form of propulsion, which increased River Commerce, over standard Sail and “Keel” Boat travel. Simple in design, a typical Steamboat used massive wooden side Wheels, which featured paddles or boards. These were arranged in a circular pattern. Wide and flat, these paddles (when turned into the water), agitated such and helped to create motion. The Paddle Wheel was powered by Steam piston. Fed by wood and later coal, these Ships were cheap to manufacture and operate. At one point (1850s) – hundreds of Steamboat Lines operated on The Mississippi River.

In addition to Commerce and Trade, Passenger travel was seen as the second most financially viable means of maintaining a Line. Many thousands travelled The Mississippi River this way. With the advent of Civil War in America (1861-65), many of these majestic Vessels were destroyed by both Union and Confederate Forces. Many more were converted into Ironclad River Warships, which proved highly effective in The Union Navy’s “River Flotillas”.

After the Civil War, a decimated South turned back to rebuilding it’s Riverboat Steam Fleets in an attempt to rekindle Trade and Commerce (both within The Region and with The Northern part of The Country). One of the most well known of these post-War Steamboats was The “Robert E. Lee”. Named for the then still living Confederate General, The “Robert E. Lee” (1866) was 1,500-tins displaced. Of wooden construction, The “Lee” was nearly 300-feet long and 50-feet in height (Beam). Twin high-pressure Steam Engines produced 120-pounds of steam pressure. Multiple Side Wheels (Amidships) served as propulsion. Her Wheels were 20-feet in diameter.

A ”Floating Palace”, The “Lee” was fitted with 24-State Rooms, each richly apportioned. She featured a Saloon, Dining Room and Nursery (and many other “comforts”). Live Music was provided by a Band. The “Lee” was also a popular spot for well-known Riverboat “Gambling” and attracted some of the best and worst of Gamblers, plying their trade on The River.

The “Robert E. Lee” was best remembered to History for the Great Steamboat Race in 1870 between her and The “Natchez”. In the Race (from New Orleans, Louisiana to St. Louis, Missouri), The “Lee” beat The “Natchez” in 3-days and 18-hours. Her record to this date is still unbeaten.

In 1882, outside of Vicksburg, Mississippi – The “Robert E. Lee”, caught fire (from a possible faulty Steam boiler). As a result, 21 Passengers were killed and The Ship was completed destroyed. In 1969, a replica (and much smaller) of The Steamboat was built and served as both Dock Museum and later Dining establishment in St. Louis. In an ironic note, this Vessel caught fire too in 2010 and was completely destroyed. 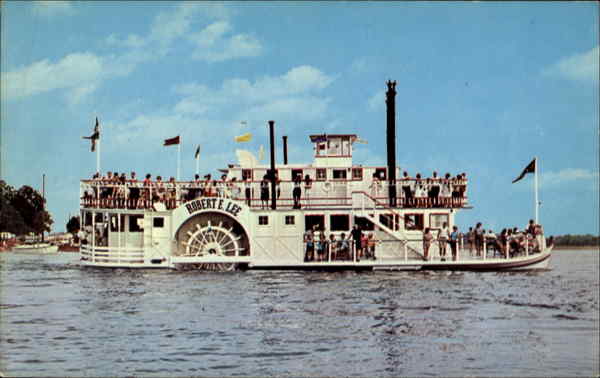