Pirates had a “Code of Ethics”. As strange as this sounds, these codified rules and regulations were actually a good practice for a Pirate (or Privateer) Crew. The established Codes (when agreed upon), were written and formed a type of constitution. All members of The Crew (even The Captain), was obliged to follow the Code. Codes not only set forth the amount (or share) each Crewman was to receive. Also, shares were set aside for Pirates who were injured during a raid. When agreed and written down, each man was expected to sign (or make his mark), and “swear” an Oath to uphold the Code. Often these Oaths were “sworn” to with a Bible. In lieu of this, an Axe or Sword was used. Other types of “Swearing Ceremonies” known to be used was taking the Oath astride a Cannon, or even “Blood Oaths” (involving cutting an arm or leg). The Codes were “posted” on the Ship for all to see. Codes were for the most part universal. Some included more (or less) regulations. Often captured Seamen were forced to sign The Code (and join or die). Often, when ships were captured, these Crewmen would often cite that they were forced to sign. Codes could be used as proof of Piracy (and a quick execution).

I. Every man has a vote in affairs of moment; has equal title to the fresh provisions, or strong liquors, at any time seized, and may use them at pleasure, unless a scarcity (not an uncommon thing among them) makes it necessary, for the good of all, to vote a retrenchment.

II. Every man to be called fairly in turn, by list, on board of prizes because, (over and above their proper share) they were on these occasions allowed a shift of clothes: but if they defrauded the company to the value of a dollar in plate, jewels, or money, marooning was their punishment. If the robbery was only betwixt one another, they contented themselves with slitting the ears and nose of him that was guilty, and set him on shore, not in an uninhabited place, but somewhere, where he was sure to encounter hardships.

III. No person to game at cards or dice for money.

IV. The lights and candles to be put out at eight o'clock at night: if any of the crew, after that hour still remained inclined for drinking, they were to do it on the open deck.

V. To keep their piece, pistols, and cutlass clean and fit for service.

VI. No boy or woman to be allowed amongst them. If any man were to be found seducing any of the latter sex, and carried her to sea, disguised, he was to suffer death; (so that when any fell into their hands, as it chanced in the Onslow, they put a sentinel immediately over her to prevent ill consequences from so dangerous an instrument of division and quarrel; but then here lies the roguery; they contend who shall be sentinel, which happens generally to one of the greatest bullies, who, to secure the lady's virtue, will let none lie with her but himself.)

VII. To desert the ship or their quarters in battle, was punished with death or marooning.

VIII. No striking one another on board, but every man's quarrels to be ended on shore, at sword and pistol. (The quarter-master of the ship, when the parties will not come to any reconciliation, accompanies them on shore with what assistance he thinks proper, and turns the disputant back to back, at so many paces distance; at the word of command, they turn and fire immediately, (or else the piece is knocked out of their hands). If both miss, they come to their cutlasses, and then he is declared the victor who draws the first blood.)

IX. No man to talk of breaking up their way of living, till each had shared one thousand pounds. If in order to this, any man should lose a limb, or become a cripple in their service, he was to have eight hundred dollars, out of the public stock, and for lesser hurts, proportionately.

X. The Captain and Quartermaster are to receive shares of a prize: the Master, Boatswain, and Gunner, one share and a half, and other officers one and quarter.

XI. The musicians to have rest on the Sabbath Day, but the other six days and nights, none without special favor. 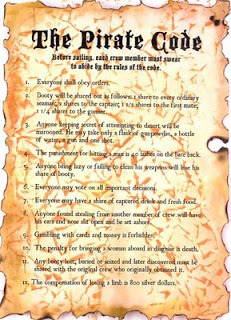