This Law, enacted by Great Britain, changed the way Piracy was legally handed. In most cases, a Captain or crew – captured in Piracy, were bound over for transport to England. In the time it would take to transport, imprison and eventually commence a proceeding – much testimony and evidence was hard to attain. Often, after such great expense, Pirates were released (only to return back to their vocations). The Piracy Act gave broad discretionary powers to Royal Governors, Administrators and Naval Commanders. The Law stated that a Pirate could be tried immediately upon capture (or soon after). Normally, execution could commence very quickly. The Act was supposed to show that Piracy would be dealt with more harshly than previously done. The Act also gave immense power to The Admiralty Board (abroad), with how they could punish Pirates or – issue Bounties for their capture and conviction (offered to non-Pirates and even Pirates who turned in their “Mates”.) In 1837, the death penalty (which was most used for ANY act of Piracy) – was repealed under revision of The Piracy Act. 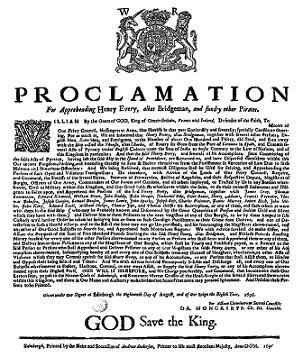