Purchased in 1642 from French builders by The Baltic Confederation, The Hanseatic League – The “Peter Von Danzig” was 168 feet in length with a beam of 40 feet. Wind powered, she could carry some 350 Crew and Transport Troops. She was originally designed to be a Transport vessel. Noted for being one the first ships to feature “Carvel Planking”, this building technique involved thed laying of hull planking end to end (prior to curving). This pattern greatly increased the design shape quality (which added to her speed). “Peter Von Danzig” mounted 18-cannon of various poundage (the largest probably 36-pound Deck Guns). When England and The League went to War around 1469, she was converted into a Warship (and her guns added). The “Danzig” was very effective in Privateering and took many British ships as prize. After the War (1474), The “Danzig” appears to have gone back to it's “Commerce Trade”. She is recorded in many Ports – but disappears around the late 1470s. She was possibly decommissioned and broken up. 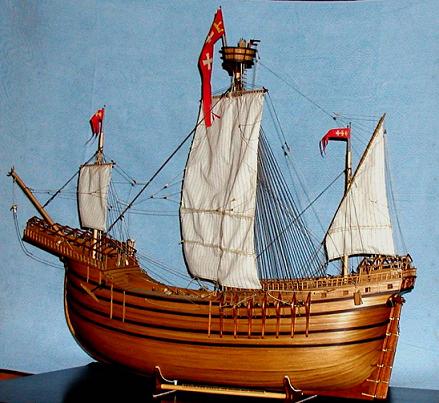