A Military Tactic of The Parthian Empire  (247 BC - 224 AD), The "Parthian Shot" was devised to be used by Parthian Light Cavalry, in particular - Horse Archers. Light and agile, Parthians wore little Armor. Their primary weapon of choose was The Recursive Bow. This design of Bow greatly increased Arrow velocity. The tactic involved the additional use of The "Feint". Parthian Cavalry would seem to retrear, and draw out an Enemy from the safety of their Positions. Giving pursuit, The Parthians would maintain control of their Mounts with their legs and thighs (maintaining forward momentum). Turning their torsos to an almost 180-degree reverse (vackwards) position. The Horse Archers could then fire up to 3 aimed shots within 30-seconds. The Parthian Shot soon was "exported" as a tactic into The Middle East, with many Nations using it. Muslim Warchief Saladin made great use of the maneuver against Christian Forces in the early Crusades. 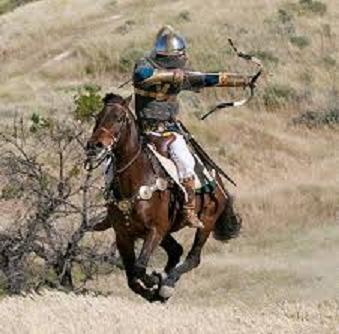