The ''Palmetto'' Medal was an official award given to survivors of The Palmetto Regiment of Volunteers (Militia), who fought in The Mexican War of 1846-1848. The Regiment was one of the first into a captured Mexico City, Mexico – and raised their Militia Banner, The ''Palmetto Flag'' from the Central Public Court (Forum). To honor their courage, The South Carolina State Legislature authorized the production of these Medals.

First issued in 1848, Gold versions were given to Officers of The Regiment, with Silver to Non-Commissioned Officers and Enlisted. The Medal was circular in pattern. The Front bore an engraving of The State Seal of The State of South Carolina (upon which The Palmetto Tree features prominently). Engraved around The Seal are the words ''Vera Cruz, Contreras, Churubusco, Chapultepec and Garita de Belen'' (the names of the major engagements That The Regiment fought during The War). A Green cloth Ribbon was strung thru The Device, which allowed for it to be worn around the neck. Actual numbers issued are now unknown, with many Records having been lost during The American Civil War of 1861-1865. 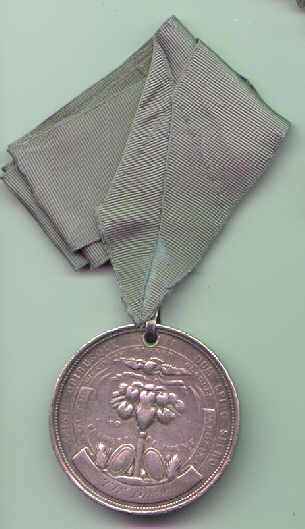