This 19th Century Frigate-Class Ship of The Imperial Russian Navy. Designed from the British ship HMS “President”, “Pallada” was built in 1831 and launched a year later. She displaced over 2,000 tons and sat 52 feet tall in the water (beam). A full sailed ship, she crewed around 420 Officers and men. She carried 44 guns (all of which were 24-pounders). Her Hull was sheathed in Copper. She was also one of the first ships to feature Portholes in her hull for viewing. “Pallada” was noted for being the first Russian ship to visit (and set up Diplomatic ties with Japan in the 1850s). Declared unfit for service ant the start of The Crimean War, she was scuttled and sunk by her crew in 1856. 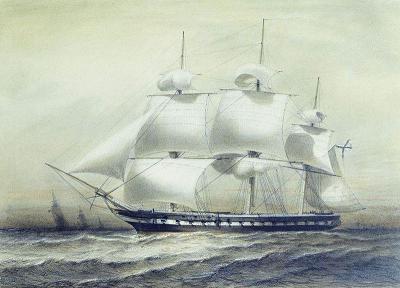